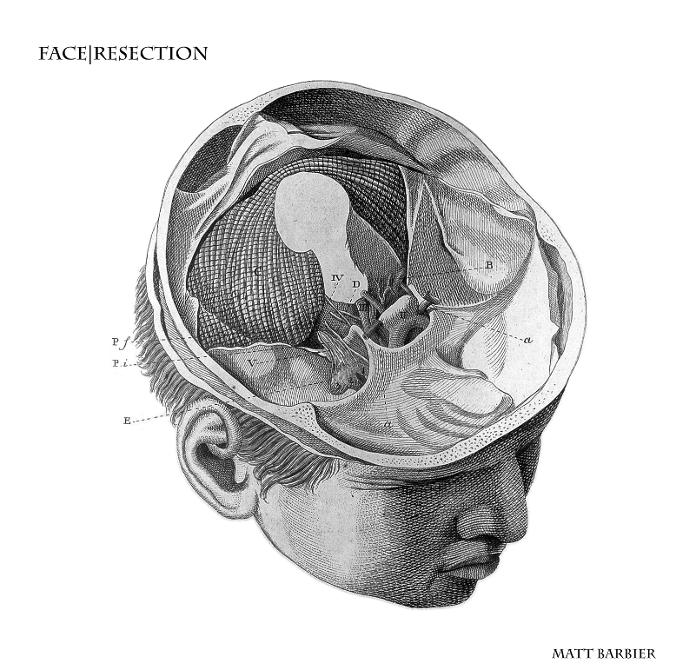 Face|Resection is a study in mechanization and degradation. Both works explore hyper industrial regularity that sonically functions on the imperfect regularities created by an organic body. The two works on this record are paired together for their focus on the obfuscation of the human body creating sound while simultaneously being reliant on the body's augmentation of the sonic fabric of the works. Face|Resection is a project devoted to pushing the trombone and trombonist to the end of possible. This album is not about failure- it is about finding that unstable edge and finding a way to maintain the instability without succumbing to it.

"But, like spectacular gore in a horror film, you won’t want to turn away." - Elizabeth Hambleton, New Classic LA

"It won't be pleasant listening for most. But then there's us." Snakes and Cats

Clint McCallum's Bowel Resection walks this line by creating a disembodied, nearly static texture through an impossibly long single act. The sound of short, desperate sniffs anchors the work into a physical realm that, hopefully, breaks apart the work's potential to fall into an impression of a static stability that is divorced from the internal desperation of the musician performing it. Periodic, common tone shifts in the tenor-bass valve work to expand this dichotomy further by providing sudden shifts in pitch material, creating a traditional harmonic motion [I-IV-V-I] while the upper note of the split-tone remains unchanged, forcing this motion against the static impression of the work.

Nicholas Deyoe's facesplitter provides a vast departure in approach to the same concept. To Nicholas the sound of the human is an essential element that is integrated as part of an inorganic machine creating sound. The performing musician is asked to integrate the human elements of his/her playing into the sound as part of the idiosyncratic mechanical function and to find a way to regulate those human elements into that form. Nicholas described the piece as 'inorganic and concrete covered' and with in that direction lies a challenge to create a physical sound that can be heard as a broken machine rather than a mechanized human attempting to disguise his/her human functioning in regularity.

When I first received the scores to facesplitter and Bowel Resection in 2011, I was fairly certain that both pieces were far beyond my abilities. The primary issue was the same in both pieces: how to learn/perform music that may or may not be possible and cannot be understood until learning how to play the unknown sounds. This catch 22 was a common theme in the trial and error (and more error) process of finding the sounds needed to make these pieces exist. It was often maddening to try and find a way to merge the disparate demands of creating an unstable sound with a way to apply techniques that require a massive amount of stability and control, such as circular breathing and multiple tonguing. The process frequently felt like dealing with a stray animal that needs help but doesn't quite trust you enough to care for it. The sound cannot be forced under your control, but instead a relationship must be developed within which the sounds like to live. And, on their terms, you try to find a mode to coax some form of regularity out of them- studying their habits to find a pattern and simply move with their needs while finding ways to corral them in the direction the music demands.

Because of this process, learning the music was something I had to take at an extremely slow pace, picking at it over a long period of time. It was an immensely rewarding and fluid process to work with Nick and Clint to tweak the pieces to work with the habits sound exploration. Quite frequently, the work would create familiarity which would shift the possible limits of certain sounds and allow us to push the music further than originally conceivable. The more I worked on the sounds the more daunting some became, but for others the limits seemed to get pushed further to find an unstable edge we could stand on. In some cases we came across sounds I did not know were possible- sometimes prompted by a sound Nick or Clint was seeking, sometimes entirely by accident or fatigue. I'm eternally grateful for Nick and Clint's patience with this slow process of back and forth and long delay before the premiere, which allowed me to bring the most I could to their music.

When Matt Barbier premiered Bowel Resection in 2014 a majority of the audience assumed there was electronic processing involved. This was due partly to the rich sonic complexity his split-tones, but mostly because he never took a breath. Transitioning between split-tones while at a loud dynamic and circular breathing is an inhuman (and inhumane?) task. In fact, when I wrote the piece I wasn't sure that it was physically possible. After the performance I revealed that there had been no electronic processing, that what we had all just heard was someone circular breathing a split-tone for seven minutes. People were shocked. This experience at the premiere me concerned as we approached this project. If people assumed it was electronic in a live situation, how were we going to preserve the physicality of the performance that is so important to the piece when we create a recorded version? To me, all of the distinguishing aspects of the piece—insistence, an engulfing spectrum of sound, a blurriness that thwarts the perception of proportion and hence the formal sense of time, the bizarre instrumental mechanics, the physical extremity of the instrumental technique—all invite a vivid imagining of what is happening both inside of the trombone and inside of the trombonist's body. This is imagining is a sort of empathetic transcendence of both space and subject. If we hear Bowel Resection as electronic music it loses that sense of gravitational pull towards some (imagined) body. Then again, this zero-g approach could be a completely valid way to listen to the piece. And perhaps what is so exciting about this recording is that you can now listen to the piece in many different ways. But Matt's brief, convulsive sniffs should, on some level, continue to return you to the mystery of his struggling body.

Facesplitter is a study in mechanism and degradation. This piece began an obsession for me in music that can highlight the mechanical aspects of playing an instrument while highlighting the parts that are inherently human. The closer we get the a purely mechanical representation of something, the human failures become all the more apparent. Facesplitter alternates (and wanders the territory) between machine and person to exhibit the moments when each becomes the other. Rhythmically regular split tone pulsations eventually falter. Vocal multiphonics combine human with machine, suggesting some creation that has come to life, but is broken and dangerous. Bolts loosen and rattle. Human moments of pure and quiet tones are degraded and forced to last too long, revealing imperfections. Matt Barbier’s masterful work in the development of this piece, and the recording of it hear are the result of 4 years of experiments between the two of us, searching to find new ways to create a syntax for the incredible sounds he has learned to control and manipulate. Working with Matt Barbier on this music has been remarkably rewarding and has had a profound impact on the way that I think about all music.

Massive thanks are owed to the following people:

Nicholas Deyoe- Outside of writing music, Nick has been essential at every step of this process. He helped proofread the original grant, mixed and master the recording, and every conceivable thing in between. This record would not exist without him.

Clint McCallum- The challenge his piece presented me pushed my playing in a direction I would never have even considered otherwise. He introduced an unique challenge into my world that caused me to drastically reconsider the fundamental way I do some very basic things and in the process, he, inadvertently, fixed some pretty old trombone issues for me.

Ian Carroll- This record would not exist without Ian. He showed me what a lip-multiphonic is and how to make one. Also, Ian the commissioner of these works, so this record is indebted to him. He left the trombone before performing this music, which is how it came to me. The knowledge that this was possible to him is was essential for me to being able to persevere through the process of searching for a way to make the extreme treatments of all these techniques function. Ian had a profound a fundamental affect on my approach to music- my work would not exist as it does without his example.

DanRae Wilson- Outside of her beautiful album design, DanRae has been ,y endlessly supportive rock throughout this entire process of learning the works, encouraging me to trust in exploration, and helping to make my writing about this project coherent to anyone other than me.

face|resection is available from Populist Records in physical and digital formats.

Face|Resection was supported by New Music USA. To follow the project as it unfolds,  visit my project page: